Renaissance by Rail: Tour the Breathtaking World of Renaissance Italy

Rome, Florence and Venice were the most prosperous cities of Renaissance Italy and still represent some of the world’s most spectacular architecture and art to this day. From the Colosseum and the Pantheon in Rome, the Cathedral of Santa Maria del Fiore and Michelangelo’s statue of David in Florence, to the Piazza San Marco and canals of Venice, these three cities may offer more wonders than you could explore in a lifetime!

To help you get the most of your trip to Italy, we offer a rail tour encompassing these three incredible cities, featuring introductory walking tours upon arrival to each location. High-speed rail offers an easy, stress-free way to explore Italy, with the train stations situated centrally – just walking distance to the many landmarks offered by the cities.

The tour starts in Rome, beginning with a walking tour for your orientation into the ancient, storied city. The tour takes you to Campo De’ Fiori, Piazza Navona, Pantheon, Trevi Fountain and Spanish Steps.

These landmarks represent various glimpses into the long and eventful history of Rome. Campo De’ Fiori, a city square, has served many purposes in its lifetime, being part of the Pope’s Road, where the Pope travelled after his election, and later serving as a place for public executions – a memorial to philosopher Giordano Bruno still stands over the daily markets which now take place there. 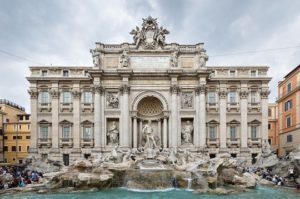 The iconic Trevi Fountain, built in 1762, is the largest Baroque fountain in the city and one of the most famous fountains in the world. Standing 26 metres tall and nearly 50 metres wide, the scale and intricacy of this incredible fountain can only truly be appreciated when standing up close.

The second day in Rome is available as a day at leisure or includes an optional tour to Naples or Pompeii.
Naples stands out as one of the best places for food in Italy. Naples is known as the birthplace of pizza, and is home to the most Michelin star rated restaurants of any Italian city.
Those with a passion for Italian cuisine will not want to miss out on the mouth-watering culinary experience offered in Naples!

“Naples is known as the birthplace of pizza” 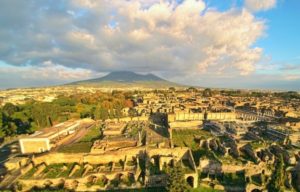 The ruins of Pompeii offer an alternative for the history buffs, with some of the best preserved ancient Roman architecture in all of Italy. Following the eruption of Mount Vesuvius in 79 AD, the city was buried in volcanic ash and frozen in time, preserving art and architecture, and allowing accurate plaster moulds to be made of the unfortunate residents of the ancient city.

After a few days in Rome comes the high-speed train ride to Florence, taking less than two hours to ensure ample time to relax and take in the sights of the city.
Considered the birthplace of the Renaissance, Florence was home to many of the great artists of the era. It has been ranked as one of the most beautiful cities in the world.
The tour of Florence includes the Florence Cathedral (Duomo), Baptistry, Giotto Bell Tower, Piazza della Signoria and Palazzo Vechhio. 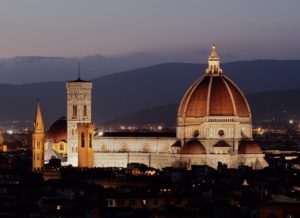 The Florence Cathedral was built in the early 15th century and remains an architectural marvel to this day.  The large dome of the cathedral remains the largest brick dome in the world, and stands proudly as an iconic sight in the Florentine skyline.

Another high-speed train takes you from Florence to Venice, the famous city of canals.
Venice was considered to have been the first international financial centre, and remained an important trade centre during the Renaissance. It is often ranked as the most beautiful city in the world, coming in just above Florence!
The tour of Venice includes Piazza San Marco, the Clock Tower and Palazzo Ducale. A gondola ride night sightseeing tour is available for those interested in traversing Venice’s iconic canal.

Pallazo Ducale, or the Doge’s Palace, is a beautifully ornate palace originally used by the leader of the republic of Venice. It is now set up as a museum, containing many iconic Renaissance era paintings, both on display and inset into the walls and ceilings of the original Doge’s apartments.

Following the final night in Venice, the tour of these three beautiful cities comes to an end, but this first-hand experience of Italy and its history is a memory that is sure to last as long as memories of the Renaissance itself!

Tour India by rail and discover its hidden places